The Essence of Excellence: an evening with James Morrison and David Jones (November 2011) 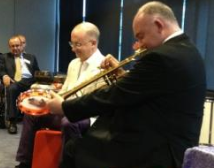 The first ‘Inner Dialogues – Melbourne’ event: “The Essence of Excellence” involved special guests James Morrison and David Jones. The event involved an evening of insightful conversation, music and meditation. The event was launched by Peter Williams (Centre for the Edge, Deloitte) on November 28, 2011, at Deloitte Australia, Melbourne.

James Morrison is, by anybody’s standard, a virtuoso in the true sense of the word. He recorded Jazz Meets the Symphony with The London Symphony Orchestra conducted by Lalo Schifrin, performed concerts at the Royal Albert hall with the London Philharmonic Orchestra and at the Royal Opera House, Covent Garden for Princess Anne, Royal command performances on two occasions for Her Majesty Queen Elizabeth II and for US Presidents Bush & Clinton at Parliament House in Australia. In 1997, James was recognized for his service to the arts in Australia and awarded a medal of The Order of Australia.

David Jones is an award-winning and highly-acclaimed drummer-percussionist, admired by musicians and music-lovers around the world. He is often described as one of the world’s most innovative and musical drummers. He began studying meditation in 1984, and since then has integrated subtle sounds and vibrations into his music-making. He is a drummer who loves silence and enjoys the universe of percussion instruments, especially his collection of Tibetan, Japanese and crystal singing bowls which feature on his many recordings.

The event was co-convened by Calm in the City and The Creative Performance Exchange and we are grateful for the support given by Deloitte Australia and Hub Melbourne.

Many thanks also to Nicky Hayward-Wright who provided a fantastic ‘Storify’ review of the evening and an short sample of the music on the night can be heard here.

Sister Jayanti is an extraordinary individual, who is best known for providing one of the clearest and most inspiring pictures of the far-reaching implications of meditation. She is the author of “The Art of Thinking”, “Practical Meditation” and “Meditation for Extremely Busy People”. Sister Jayanti is globally renowned public speaker and broadcaster; Director for Brahma Kumaris in Europe and Middle East and their NGO Representative to the United Nations.

Dr Craig Hassed is an internationally recognised expert in Mindfulness. His teaching, research and clinical interests include mindfulness-based stress management, mind-body medicine, meditation, and health promotion. An author of six books, media commentator and founding president of the Australian Teachers of Meditation Association, his pioneering work includes introducing a Mindfulness training programme into the core medical curriculum at Monash as well as the Harvard Medical School.

For a snapshot of the Breakfast Seminar, please see the Storify review by Nicky Hayward-Wright and click here to listen to a 1 minute meditation commentary by Sister Jayanti.